Yocan Ceramic Donut Coils vs Quartz Dual Coils. Which one would you choose? Let's see the choices given by YOCAN fans and the reviews of Yocan Evolve Plus.
I want to say first I really love my Yocan Evolve Plus. It's completely changed how I go about my day. It's a great purchase. I'd buy it again at $50 if I had to. Moving on... The first coil I used was the QDC and it was great. It was neat seeing crystals instead of silica, wick, cotton, mesh, whatever.

2. It May make you choke a few times until you get used to it.

3. Not all the material gets used. There is a little bit of waste but not much.

4. Taste eventually gets muddled with the QDC. Only the first couple of draws taste lovely, but that doesn’t mean the rest of the pulls taste awful either, you just don’t get that “wow! floral!!!” thought in your mind.

5. You can ISO soak these and scratch at the coil with say a toothpick to loosen hardened gunk, dry fire them on a mod at about 15W so you can get the NiCr wire to heat up to burn off some of the gunk.

6. POTENTIALLY less discreet in public if you get choked up, which you can on the QDC.

1. Heats up slower, you can take a much longer draw which I like. The airflow isn’t changed at all, just less vapor is produced at the outset so you can take a longer pull which personally I like. We’re talking the difference between 3-4s on a QDC and maybe 7-8 on a donut. Not like a crazy time or anything.

3. The taste remains extremely floral throughout the session with only the last two pulls or so tasting less floral. Never a bad taste.

4. I soak my donut coil in ISO overnight 2-3 times a week and then clean out the inside with a metal barbed pipe cleaner. I can’t get the donut back to being ceramic color anymore but I’ve been using this particular donut for almost two weeks.

5. I feel because the ramp-up time of the donut is slower it’s easier to use in places where you might not normally use a vape pen. Like, say your desk at an office.

I don't know about this 2 - 6 month on one coil business, otherwise, why sell 5 packs and not loosies but /shrug. I'm happy with either coil but for my style of vaping the donut is so much better for me. 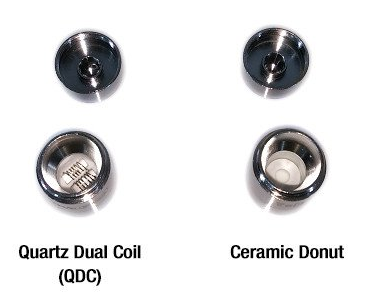